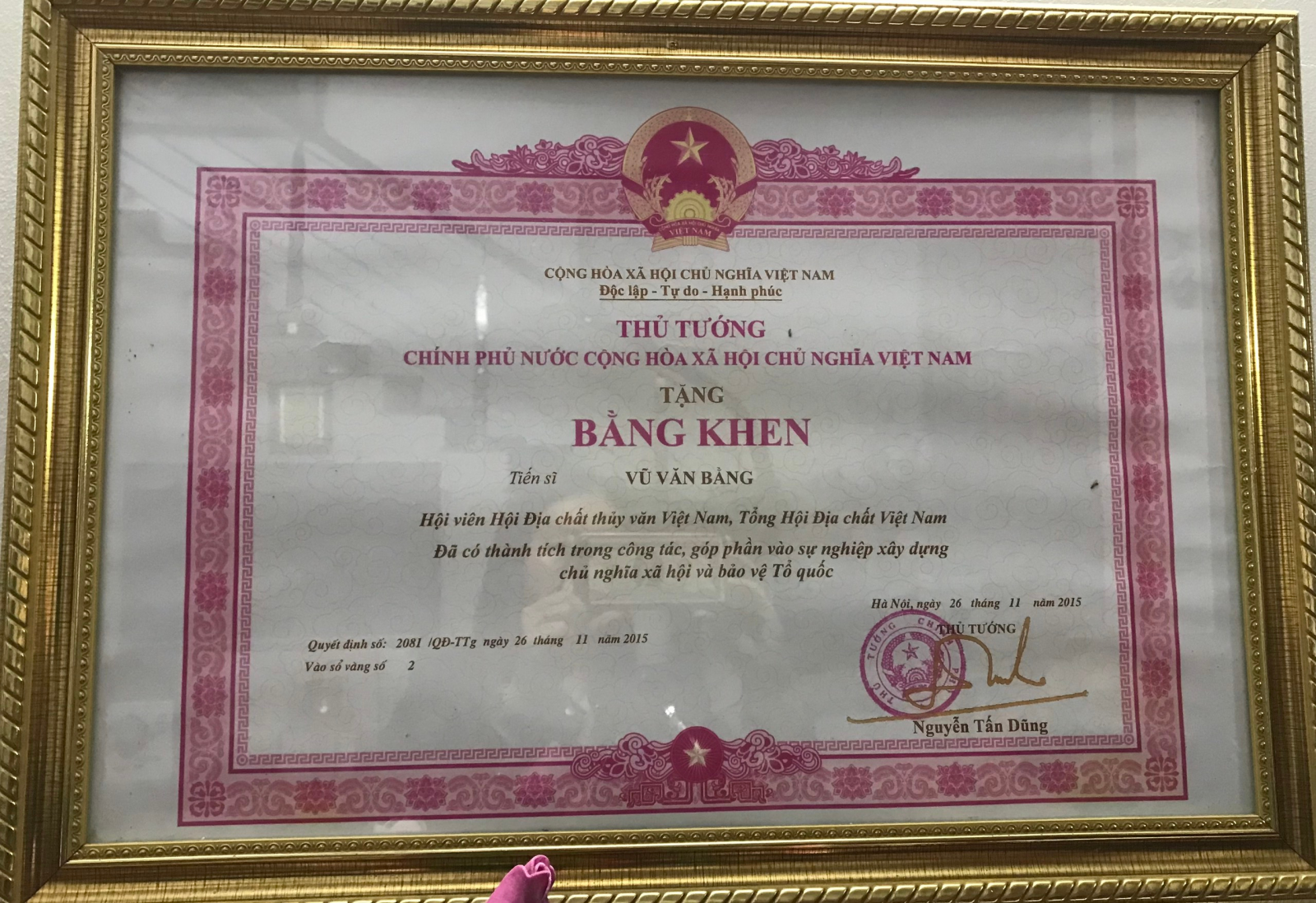 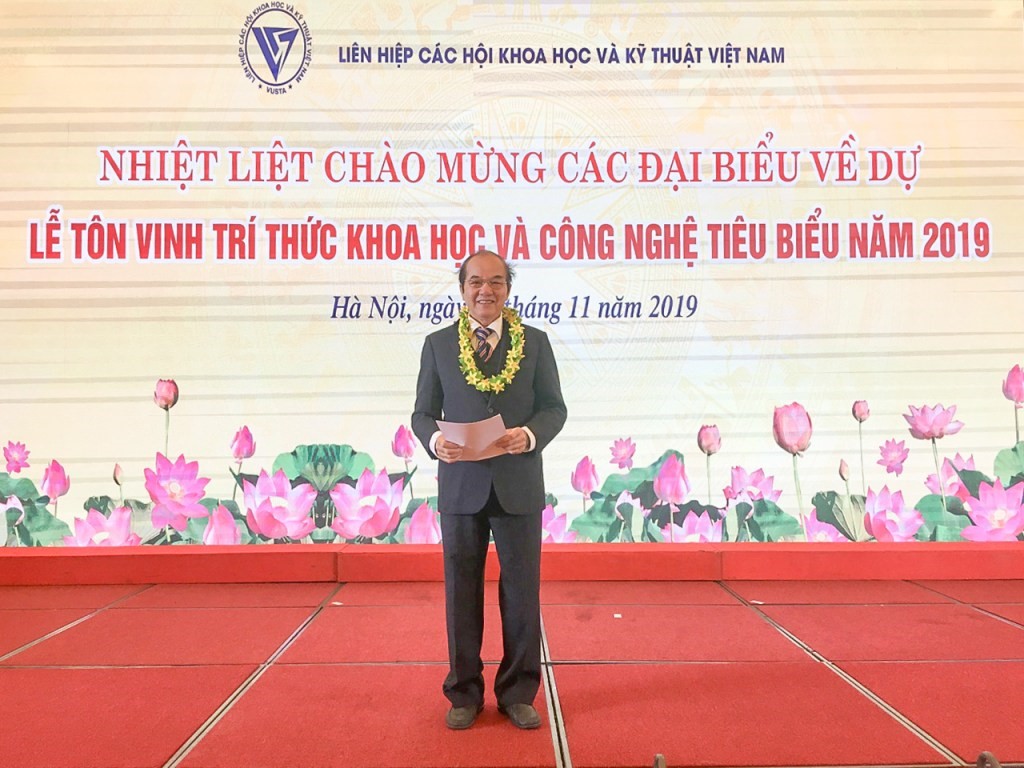 This is an opportunity for me to have an article about Dr. Vu Van Bang – a passionate, enthusiastic scientist, a dedicated teacher. Looking back on his dedication, proudly journey, with his endless enthusiasm and passion, he has made great contributions to our country's science, contributing to the mission of building a rich and strong country. This person is Dr. Vu Van Bang - former scientific research officer of the Institute of Mechanics, Vietnam Academy of Science and Technology, is currently the Chairman of the Board of Directors of Health Protect – The Earth Radiation – Environment Research Joint Stock.
Journalist: Dear Dr. Vu Van Bang, it is known that you are one of the scientists that have many national and international contributions. Last November, you were awarded the Certificate of Merit by the Union of UNESCO Associations for your many contributions to the country. Can you share a little bit about yourself?
p: I was born in 1940 in the countryside of Hai Hau, Nam Dinh province. I spent my whole life devoted to science. World-class scientific projects began to flourish during my years as a researcher at the Institute of Mechanics, Vietnam Academy of Science and Technology. Specifically, in 1980 by using mathematics, physics, and self-study data and experimenting with indoor and outdoor models about the building foundation subjected to dynamic loads I have established a formula that directly calculates the dynamic settlement of the foundation when subjected to dynamic loads. Meanwhile, the world and the country still use the static settlement method and multiply it by the dynamic coefficient for constructions when subjected to dynamic loads such as in earthquake zones.  This scientific work was reported at the National Mechanics Conference in Hue in 1980 and at the International Conference on Foundations in Brno Czechoslovakia in 1982. Especially, this is also the work that I defended my doctoral thesis in Poland and present at many scientific conferences organized by the Polish Academy. Promoting the results of research on soil and rock environment - mechanical properties for the construction of works, I switched to studying soil and rock environment - geophysics for human life, especially health. As a result of my research, I have produced a unique scientific product, which is "Magnetic Radiation Technology". The Scientific Council of the competent authority evaluated and concluded: "This is a work of scientific, practical, economic and social significance, an invention..." - I would like to quote from the report of the Council.
Indeed, the creator of this scientific work has applied it to the social life in Vietnam very effectively, contributing significantly to the development of the country's economic life. It can be proved by a series of specific products created by the doctor’s magnetic radiation technology for the country over the past 10 years. 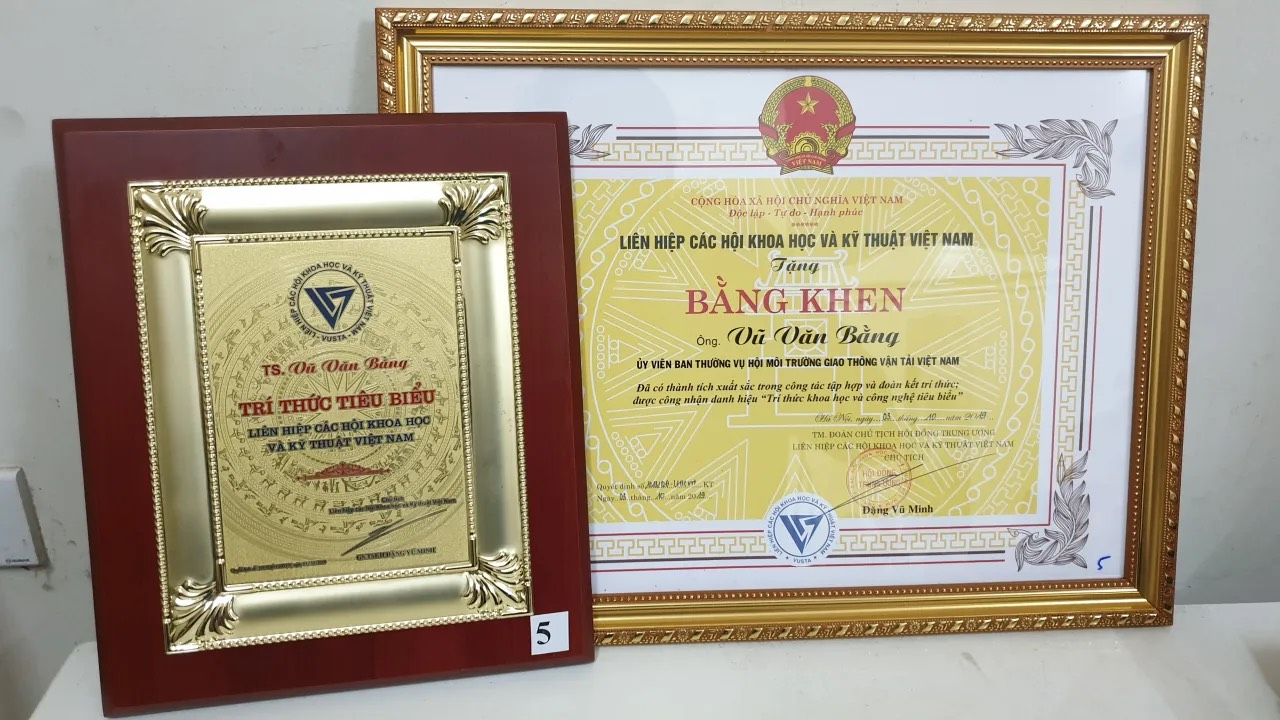 Indeed, the creator of this scientific work has applied it to the social life in Vietnam very effectively, contributing significantly to the development of the country's economic life. It can be proved by a series of specific products created by the doctor’s magnetic radiation technology for the country over the past 10 years.
In the theoretical and physical research on electromagnetic fields, the creator has proved that the electromagnetic field and the gravitational field are one. Geophysics by math, physics, chemistry, the author proves the origin and mechanism of the formation of the Earth's magnetic field explicitly and scientifically is no longer a hypothesis as scientists around the world have suggested for a long time.
With his love his dedication to the job, as well as the superiority of "Magnetic Radiation Technology", Dr. Vu Van Bang and the members of the Company have completed a huge amount of work: application of radiation technology from research with excellent success for many topics and projects of science and technology at the ministerial and provincial level required, including meeting large economic projects with companies, factories, enterprises... in many different fields such as construction, transportation, irrigation, hydroelectricity, mining geology, engineering geology, hydrogeology, environment, public health, rescue, and disaster prevention geological variables ... of which the most prominent is the search for groundwater for remote, thirsty and water-scarce areas almost throughout the country, over 40 provinces and islands, including 2 Cambodia provinces.
Especially looking for the remains of lost martyrs for the provinces, gathering teams which The Veterans Association requested, up to the present, by the machine of the company, Dr. Vu Van Bang has helped to find over 5000 remains of martyrs lost in all 3 countries of Vietnam, Laos, and Cambodia, entirely in the spirit of charity.
Whether the job is large or small, funded, or voluntary, the Company tries to complete it with the desire to contribute to the socio-economic development and promote industrialization and modernization of the country. Especially creating the best living environment for people to be healthy, live, study, and work effectively... 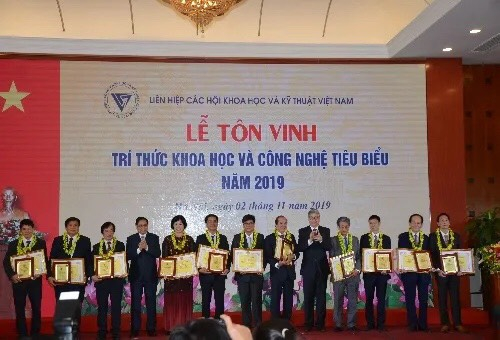 “Currently, I am invited to teach postgraduate classes of the Faculty of Interdisciplinary Sciences, Vietnam National University, Hanoi.”
Valuable and authentic contributions to the country in general, and top-notch contributions to the country's science, in particular, have been recognized and respected by society. In particular, I admire his quiet career in scientific research and throughout his life, from the time he graduated from college until now, he is over eighty years old.
Dr. Vu Van Bang was honored to be awarded many noble titles and awards by the Party, Leaders of ministries and agencies, and many meaningful certificates of merit. The project of Ha Giang Lake to supply water to people in mountainous highlands was granted a certificate of merit by Ha Giang province in 2001. The research topic finds the causes and solutions to eliminate traffic accidents using National Highway 5 as the main road. The pilot was awarded a certificate of merit by the Ministry of Transport in 2014. Notably, the Certificate of Merit from the Prime Minist  in 2015, the title of Outstanding Science and Technology intellectual in 2019 by the Viet nam Federation of Associations, anh the Union of Unions in 2021. UNESCO Vietnam Association awarded certificates of merit to famous scientists.
by Ha My